For this, the eighth episode of motivational speaker and Amazon bestselling author Jeff Yalden’s BOOM Podcast, he decided to once again speak from the heart – this time about something that had been weighing on his heart: Dealing with resentment and anger.

Yalden makes no bones about being very open and honest when it comes to his own mental health and is an advocate for speaking out about mental health in general. And in this case, this is for two reasons:

1) He is open about his mental health because it is a part of his career and he is very passionate about it.

2) Talking about it helps him to encourage and support others in their journeys in learning to deal with whatever issues they may have.

In this episode of The BOOM Podcast, Jeff brings the BOOM to resentment and anger, starting with the BOOM that it’s OK to ask for help. 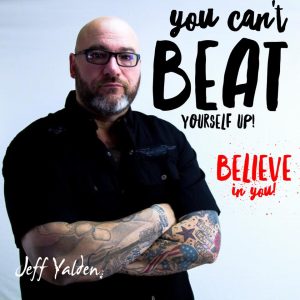 “When you ask for help and you continue to ask the question, the answer should come. But too many people are afraid to admit that they might need help,” he said.

This could be asking for help by getting therapy or being prescribed appropriate medication by a physician.

“People don’t want to admit that they are getting help dealing with things, which I think is ignorant. You could learn to live with mental health issues and lead a very fulfilling and meaningful life.”

When he recorded this podcast episode, Jeff had recently gone through four rough days.

“I was feeling resentment and anger in my heart, and that was a feeling that I am not used to, but for whatever reason, we all have these triggers that produce different emotions,” he said.

Many of our resentments come from situations in our pasts.

“Until a situation is dealt with and has closure, we can’t put it to bed. If we still harbor those feelings from then, that’s not healthy. I want to share with you something that I think is very simple, but it’s also very important: You need to have a resolution for your past. If you don’t have a resolution, then you are going to feel that resentment and anger.”

Jeff brought up the topic of divorce. If you are no longer in a relationship with someone, you owe nothing to that person. You don’t owe any emotion to that person.

Divorce can be tricky because, even though the old relationship is gone, things like finances, alimony and child support might still be in play – and there is no resolution because a person could be dealing with something that is still in the present.

But Yalden said that this is less about them than it is about you. Responsibilities and obligations might factor into this equation and must be dealt with, but some of the resentment can be alleviated by talking a proactive approach to these obligations. 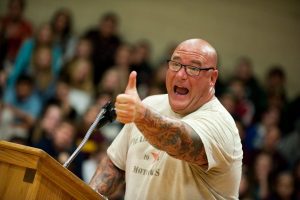 Let go of the past and meet your responsibilities today. This is the path to clarity.

“So now you have the present that you are dealing with. That’s your obligation. That’s your responsibility. That’s where adulting comes in. You address that issue with [the other party] to find resolution or you need to take responsibility for the situation to take care of it in your heart. You address it. Don’t avoid it and deflect the attention so that it stays off you – that’s when you get into a lot of trouble.”

During those recent rough days, Yalden brought the BOOM and scheduled a counseling appointment.

“I went and sat down with my counselor for an hour and a half. I had one of the most amazing talks that we have ever had. And I love visiting my counselor because she said, ‘Jeff, you think at such high levels now that this isn’t even counseling anymore.’”

He was very proud of that because it meant that he was doing good work and constantly seeking to be a better person.

BOOM is a factor and an effect. In this case, the factor was that Yalden took steps to address his anger and resentment in counseling – and the effect was the reward of clarity from having addressed the issue.

“That’s where we live the BOOM. It’s one word that can change your life. BOOM is motivation and BOOM is reward. If you have issues in your life that you need to address, don’t be too proud and don’t have too much of an ego that says, ‘Yo, I’m fine. I don’t need to talk to anyone.’  I think that’s an immature response. I think it’s a childish response. I don’t think you are any less of a person because you take medication or you seek help.”

Listen to episode 8 of The BOOM Podcast HERE.

GRAB your copy of BOOM! One Word to Instantly Inspire Action and Deliver Rewards and Positively Affect Your Life Every Day.