As you may have noticed, mental health speaker and Amazon bestselling author Jeff Yalden sometimes records episodes for The BOOM Podcast on the fly. His travel and speaking schedule is usually jam-packed, and he takes advantage of every opportunity to make sure he gets his message out, whenever and wherever he can.

Episode 56 was no different. Jeff was sitting in a warm rental car and watching the snow come down in Fargo, North Dakota – the first snow he encountered this year.

Earlier that day, Jeff said he was 15 miles from Sky Harbor International Airport in Phoenix, where he was scheduled to take a morning flight to Minneapolis. He thought he’d get to the airport early and get a bit of work done before his flight.

That 15 miles took him an hour-and-a-half, and when he got there, things were at a standstill because a bomb threat had been called into Sky Harbor. There were no flights coming in or going out. Rental cars and buses were being stopped and checked.

The first class and priority boarding line was 100 people deep.  At that point, his flight was supposed to have been boarding in 20 minutes. He mentioned this to one of the airline employees, but was told to get back in line. 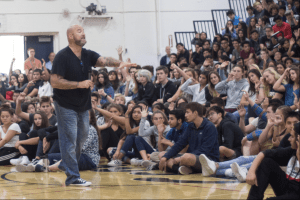 You might be wondering what this has to do with an Attitude of Gratitude.

“I spend a lot of money traveling all over the world, doing the work that I do, and I’m t hinking that I have got to get to my flight, because Concordia College had a suicide about a month ago. I had to speak to these young people tonight and do my thing.”

But he was surely going to miss his flight.

“I kept believing and asking questions, and some of the American Airlines agents said they were sorry, but there was nothing they could do.”

But Jeff kept asking, and he finally asked the right person – a lady who took charge, walked him through TSA and right up to the gate – where they checked his bag.

He was the first one on the plane to Minneapolis.

Another kicker is the fact that he thought he was speaking at Concordia University in St. Paul, Minnesota but found out when he landed in Minneapolis that he was in fact specking at Concordia College in the twin cities of Moorhead, Minnesota and Fargo, North Dakota.

Jeff realizes that it might seem a bit narcissistic; flying first class and enjoying the privileges of frequent air travel – and with everything going in the world, he should be grateful to simply be alive. 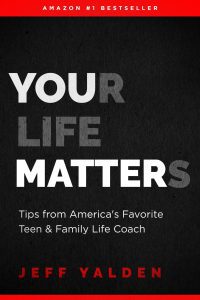 “I get it,” he said. “I pray every day for the people – whether it be the victims of the Las Vegas massacre, or the [recent church massacre] in Sutherland Springs, Texas. I understand. For millions of people, life goes on – and for many people, life stands still, and I am sorry.”

As he was getting ready to speak in Fargo, he got a text from a friend that a young man in the Carolina Forest area of Myrtle Beach made that forever decision and hung himself that very day.

“My friends, we live in a very uncertain time. If we let all of this affect us every single day, it’s going to take its toll emotionally – and for many of us, it does,” he said.

But one thing that Jeff said keeps us going is this: We simply wake up, brush our teeth, wash our face, do our dance and walk out the door, putting one foot in front of the other.

Despite the tragedy and the negativity in our world, Jeff talks about three important points to foster a sense of gratitude and help us on our way:

Don’t let life beat you up.”

Jeff’s speaking calendar fills up fast. To book him now for your event, organization or school now, call 800-948-9289.

For a limited time, you can own Jeff’s new book, Your Life Matters, for only $0.99 on KINDLE.