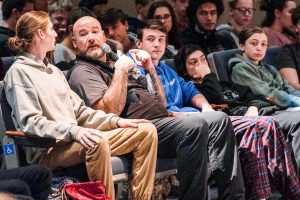 On December 14, 2022, I was invited to speak at South Newton High School in Indiana.  48 hours prior to my visit a high school junior had made that forever decision.  He committed suicide.  Just 48 hours prior to me visiting the school.

It was a late Sunday night that he took his life.  The following day the teachers and staff were told before the students had arrived, but many of them had already heard.  Word gets out very fast these days with social media and texting.  The school handled it very well, but there was something else that needed to be addressed – Teen Mental Health and Suicide Prevention speaker, Jeff Yalden, was scheduled to speak and share his message for the students and staff, parents and community.

The school administration and the counselor had talked.  Only about 260 students in the high school.  Small school.  You can imagine the impact this suicide would have on this school community – students, teachers, coaches, parents and families.  But what should they do with me. being already scheduled?

The counselor had called me right away and we had a wonderful conversation.  I was willing to do whatever it took.  I was even willing to come back in a month on my own expense, but I wanted to listen to what they thought and where they were.  My initial thought is that my visit would be too early, but again, this is the work I do with schools in crisis.  Nonetheless, I couldn’t stop thinking that they weren’t ready and this could not end well.

Research says the same thing.  The students are traumatized and talking about it so early wouldn’t be healthy.  They have crisis counselors on hand and support dogs.  We left it for the day to sit on it and think about it.  The issue was I was already scheduled and coming to the area to speak to three other school communities the Jasper Newton Foundation had contracted me for as well.

The following day the school counselor and I spoke and it was decided by the school to still have me come, but it would be based on volunteer only.  If the students want to come to the auditorium to listen they could.  If they didn’t want to come they would go to the gym or any other area they designated.  Great idea.  Settled.  Let’s get ready . . . I am coming to South Newton High School.

Although it was confirmed I would be coming now I felt the pressure knowing that this was a very raw situation I was coming into and students can be vulnerable.  Glad I have experience, but this was too raw.  I got this I thought and instantly, I realized and thought to myself, this visit and conversation isn’t about me, my story, power point, signs and symptoms, etc.  This is about me serving my heart and listening to theirs in a safe space where there is no judgement and they can be heard.  That’s all I kept thinking.  I didn’t even prepare a speech for this.  I just prayed and asked God to lead me through this day.

His Locker was a Memorial 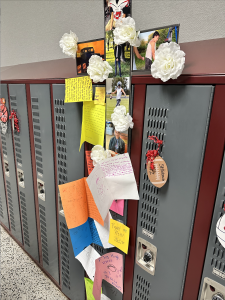 His locker was a memorial.  Is this the right thing to do?  Research says, probably not.

My conversation with the principal and the counselor about the locker was what do the students need right now?  How can they be heard, but to be mindful and to openly talk with those that were closest to him.  I also suggested putting a time period on how long the locker stays up and when they take it down maybe do it together with his closest friends and his girlfriend.

I suggested they all do it together because this could help give them closure and they’re all a part of it.  Then, spend time with the counselor and talk about how they felt and what doing that together meant to them.  We all agreed that would be how they would handle it.  The kids need to be heard and it needs to be talked about in a space that is safe, non-judgmental, and with respect where thoughts and feelings are validated.

Tough conversation to have.  Who’s to say that what is right is right and what isn’t right is wrong?  In a situation like this it’s best to think about what is in the best interest of the students and staff.  No school administrator is ever given a certificate on how to handle situations like this.  It’s an effort and decision that is made by more than one person, but always do what is in the best interest of everyone involved.  They did and they handled it incredibly well.

Research shows that suicides tend to be contagious, especially among teens and adolescents.  This is what is known as the suicide contagion effect.  This effect is also what’s responsible for copycat suicides.  In copycat suicides, victims are triggered by another person’s suicide and learn suicide-related behaviors from them. Suicide clusters or copycat suicides occur when news of the suicide impacts one’s social circle, and/or people identify with the suicide victim.  In this case, a small school, most everyone identified with the young man.

I remember talking to the counselor and mentioning that it being based on volunteers that she shouldn’t expect many students to come.  Seriously, what student given the option to hear a speaker talk about teen suicide or go to the gym or library would want to come to the 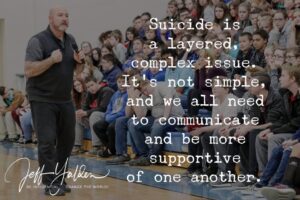 auditorium? Let alone, after one of their friends or peers just ended his life 48 hours earlier.

I arrived the school early to see and feel the energy by seeing the kids getting off the buses and entering the building.  They had a donation box set up where the students could donate money and help the family with expenses.  A few thousand dollars was donated to that box on this morning that I was there.

About 9:30am the announcement was made for anyone interested in coming to the auditorium please make your way down. I stood outside the auditorium with the counselor and some teachers and I thanked every student and teacher for coming.  One-by-one in droves the students entered the auditorium.  With each student passing by I got more and more nervous.  I just kept praying and thinking to myself, “Just be the calm they need.  Be the support they need . . . Be Presence!”

About 180 students entered the auditorium and sat quietly awaiting what was about to be said or what was to happen.  To be quite honest, I think I was thinking to myself the same thing. It wasn’t about me.  My job was to be ready, but I was SCARED.  Because I knew that I had to be in total control of this situation and whatever was to come in the next few minutes to few hours.

Everyone was seated.  I didn’t want any introduction.  It wasn’t about me or what was about to happen.  The microphone was there and I just took it and staged myself up front.  The teachers stood in the back.  Students sat with their heads down and I started with, “I’d like to give you a gift.  The gift I’d like to give you is the gift of time . . . ”

Here is a quick video of what I did.  It’s important to watch.

My first thoughts were to start off with a silent meditation. This was to settle them in and center them with calm while also earning their trust.  Then, it was about me letting them know I cared about them and my heart was present with their thoughts and feelings.  Three hours later most of them left for lunch, class, or wherever they needed to be.

When everyone filed out, I continued to spend time with the girlfriend and some of the students closest friends.  We laughed together as they shared some stories about their friend.  What a wonderful moment shared with laughs and tears. It was a moment that kind of gave them some closure for what they’re having to deal with.

Before I left the school I visited with the counselor, the school principal and some teachers.  I thanked them for holding this space and for what they do.

What a great school that is a model for how a school should handle a suicide of one of their very own.  No situation is ever the same.  Be present.  Hold space.  Listen and allow your students and teachers to be heard.  I’m forever thankful to serve another community.

If you’re interested in me coming and visiting your school community for a high school motivational assembly or teen mental health, suicide prevention, crisis intervention, please visit my website www.JeffYalden.com. 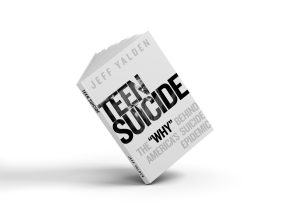 https://www.amazon.com/Teen-Suicide-Behind-Americas-Epidemic/dp/198656777X/ref=sr_1_2?keywords=Teen+Suicide+Jeff+Yalden+Book&qid=1571417850&sr=8-2
About the Author
Jeff Yalden is an expert consultant in the area of mental health and suicide prevention and how it relates to our mental health working with teens, educators, mental health professionals, and school communities.  Jeff works with school communities and speaks at adult conferences, colleges and universities, talking to both students, parents, educators, counselors, mental health professionals, doctors, and psychotherapists about mental health today, the on-line world, and how technology plays a significant role in his theory on suicide.
Jeff Yalden is highly regarded as one of the top mental health speakers in the world.  He is also a leading Suicide Crisis Intervention Expert and Suicide Prevention trainer, having worked with hundreds of school communities in need of crisis support.
He is a four-time Amazon bestselling author, including his recent books, BOOM! One Word to Inspire Action, Deliver Rewards, and Positively Affect Your Life Every Day and Teen Suicide: The WHY Behind America’s Suicide Epidemic.
Tagged High School SpeakerHigh School SuicideIndiana Student SuicideJeff YaldenSouth Newton High SchoolSuicide Prevention for SchoolsTeen Mental HealthTeen Speaker on SuicideTeen SuicideTeen Suicide PreventionYouth Speaker