“This is probably the only program where I ever had cancellations because of snow – and then finally on the third attempt, it worked,” said Jeff Yalden.

Having grown up just outside Merrimack, Jeff was happy to be back in his old stomping grounds.

“A lot of my friends went to this school or lived in the community. I felt like it was good to be back. I loved the administration and the teachers, and we had a really great time.”

He electrified an assembly of 600 kids and later presented an in-service program for the teachers, with a focus on validating who they are and the importance of their work. He also worked with 13 at-risk kids. 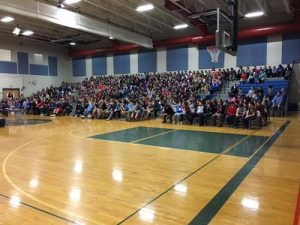 Yalden talked about the value of a plan, and told the kids that it wasn’t too early to have a plan for their lives. He said that life will never be fair, but stressed the importance of resiliency. He spoke of trust and the human imperative of helping others.

“You know what I think good people do? When we see our peers down-and-out and when we see that our peers need help, we help them out, right?”

His teacher in-service program was well-attended, and Yalden pointed out that this was not mandatory for teachers to attend.

Yalden’s mantra – Take Time to Think – resonated with Merrimack Middle School Principal Adam Caragher. “I said it in the p.m. announcements today, and it’s something I want to make sure kids are doing – taking time to think,” he said.

Assistant principal Shawna D’Amour was pleased with the day as well, and impressed with the number of students who wanted to meet Yalden after he spoke.

And a couple of Yalden’s talking points hit home for D’Amour.

“Something I really loved is when [Jeff] talked about the Law of Attraction and if you are going to be a victim or a victor, and also – if you look in the mirror, is the person inside as beautiful as the person on the outside. I think that resonated with some of the kids,” she said.

As soon as he was finished in Merrimack, Yalden drove 60 miles to Endicott College in Beverly, Mass., where he presented fun program that night called Real Talk for Real Men.  Although he said he was expecting to see perhaps 30 students, more than 120 showed up

“Quite a few women came out too, and it was awesome,” he said. “I love college students because you can be real and you get to talk the way you want to.

After his talk, Yalden was surprised that probably 50 students lined up to shake his hand. Some of them said he was the best speaker they heard in their four years on campus.