Jeff Yalden, North America’s Number One Youth Motivational Speaker, spent last week in the Greater Houston Area, mesmerizing markedly different schools, teaming up with Houston-based 91.7 FM NGEN Radio, an alt-pop and hip-hop station, which, according to its website, is focused on bringing music and a message of hope, unity and love.

Monday, April 3 started with two programs at Teague Middle School in Humble, Texas, where he presented to a total of about 1000 kids.

“This was a very tough audience,” he said. “I promise you, nine out of ten speakers would just get laughed out of that gymnasium, but we had a great talk.”

Yalden said it took about five minutes to get the kids to realize that he was legit and that he cared – and had the tools to deliver his message.

He got nearly 30 minutes in each assembly, and was brought in by NGEN Radio.

“NGEN is a positive radio station, and they are really trying to promote themselves and give back to the community – doing good things for the young people – and I am really impressed with who they are,” he said. “I am working with a team of people who are giving out a lot of T-shirts, towels and backpacks for these kids.”

He said it is hard to walk into a school and do something good that the kids and the teachers like equally, but this happened at Teague Middle School.

“We did more selfies with the teachers and the staff members than we did with the kids. It was pretty awesome.”

His day only half over, Jeff headed over to Summer Creek High School in Houston to deliver his message to ninth and tenth graders – and he pointed out that afternoon assemblies are usually not as effective as morning assemblies.

“When you are a funny speaker and the students go with a laugh, it’s very hard to get them to come back, but the ninth-grade assembly went great.”

The tenth graders were unruly and disrespectful at first, and if Yalden wasn’t a pro, he might have thrown in the towel.

“I walked off stage – and I’ve never walked off a stage in my life – and then [NGEN Radio midday host] Ayana Mack kind of lit into them with some harsh words like, ‘straight up, man – here is this dude who is pouring his heart out to you,’ so I gave it another chance and the kids were great – but I think it was the first time ever where I was like, ‘you know what – I’m done talking, let’s get the music pumping.”

Each school had a dance-off with the teachers, which Yalden said was a lot of fun.

Day two started out with a presentation to 300 seventh and eighth grade students at Gregory-Lincoln Education Center in South Houston, a K-8 school which includes a fine arts magnet program.

“Outside their school, they have a brick roadway, and these bricks were hand-cut by slaves,” he said. “It goes right from their school into downtown Houston.”

One of the administrators took Yalden outside to show him the roadway, and told him that it was a point of pride to the students and the community.

“I got to thinking that this walkway is kind of like the foundation that we are built on,” he said, adding that he used a similar analogy with the kids – that our lives must be built on a solid foundation. 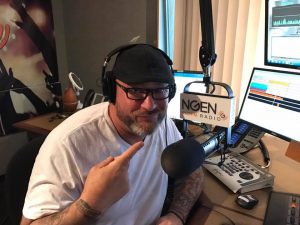 Along with a crew from NGEN Radio, the next stop was Madison High School, once attended by football star Vince Young former Texas star quarterback and first-round pick of the Titans.

“We just spoke to the senior class at Madison High School, and we went about an hour and ten minutes with them,” said Yalden. “We had a great talk, but the one thing I wish was that the seniors were more present and opened their hearts to listen.”

Day three blew him away when he arrived at Humble High School to present to 500 freshmen and 500 sophomores.

“I knew from the moment that I walked into this school that we had something very special,” he said.  “The entrance reads, ‘International Baccalaureate School,’ and the foyer was absolutely gorgeous. Once we walked in there, we just totally rocked it.”

Yalden said the kids were so attentive and respectful that he could well have been a preacher – and some of the kids yelled, “bring it” and “preach it, brother.”

After that talk, Yalden headed over to NGEN headquarters.

“I got to meet about 100 people from the radio station. They had an app last year and just went live with 91.7 FM – and their goal was to hit 100 thousand listeners. Not even a year later, they surpassed their goal and hit just over 200 thousand.

At a late morning NGEN worship service, Jeff spoke for 30 minutes to staffers.

“I got to share my story about my relationship with God, and talked about how God has impacted my life to the degree that He had. It was just unbelievable,” he said.

Jeff and NGEN Radio closed out the week at two schools: South Houston High School and Welch Middle School – and thanks to an intrepid limo driver – he made his flight home.

“I think as a team, we got better as the week went on. We just had an amazing time,” he said.

To discover more about the Jeff Yalden Experience, visit www.jeffyalden.com.