In episode 47 of The BOOM Podcast, Amazon bestselling author and mental health speaker Jeff Yalden spoke from the heart about his struggles with mental illness as well as his views on the state of mental health in the United States.

The one key fact Yalden wants those struggling with mental health issues to understand is this: Living with mental illness does not mean that you are crazy.

“I think what makes you crazy is when you don’t recognize, or you are not aware of your mental illness,” he said. “Many of you know that I recently had an episode I haven’t had in maybe 15 years – and then I realized that I hadn’t been taking one of my medications.”

He thinks this great, because sometimes when we take our medication, we start to feel good and we can potentially fool ourselves into believing that we no longer need it.

“I’ll tell you what: I’ll be on medication forever,” he said.

Over the years, Yalden has met many struggling people who say that they don’t need medication or therapy because that stuff is for “sick” people.

“Listen: If you have cancer – God forbid – you go and get chemotherapy, and chemotherapy I hope will make you feel better and free you of cancer. If you need glasses, you get an exam, and the eye doctor prescribes you glasses.”

We must stop stigmatizing mental illness and see it for what it is: A medical condition that can be treated and managed, like an allergy or diabetes.

Yalden is a man who lives with mental illness every day and is deeply passionate about mental health.

After going through a divorce, Yalden took a hard look at himself in the mirror and asked himself honestly what he had to do with the failure of the marriage.

“It’s a powerful place to be. I realized that my mental illness was much greater than the respect that I ever gave it.”

He continues to look in the mirror daily – not focusing on how he looks, but rather on who he is.

“I think when you really address those issues, that doesn’t make you crazy. It makes you a leader and a role model – somebody that many people can look up to. If you are being transparent about struggling with the same issues that other people are suffering with, that’s a good thing.”

According to Yalden, mental illness is going to be the greatest public health crisis of our time.

“It’s not a family issue anymore. It’s an economic issue, and if you and I are unwilling to talk about it, we are not going to make progress,” he said. “Let’s stop being part of the problem – stigmatizing mental illness – and let’s look to be the solution for people.”

Yalden realizes that many of us are not suffering from mental health issues. We all get bummed out occasionally or have days when we’re feeling down. But then there are issues like major depression and dysthymia – a persistent and chronic form of depression that some folks don’t even realize they have.

“I am not going to negate what depression is for some versus what it is for others, but whether we have mental illness or we don’t – we have a responsibility because we all know someone who is suffering. The best thing that we can do is to support them in their journey – but if they are unwilling to get the help that they need, then I will be the first one to say, ‘I can’t support you if you are not willing to get help.’”

If your loved one is willing to get the help they need, get in their corner.

When a person can admit that they live with mental illness, the prospect of reaching out for help becomes much less daunting.

And Yalden knows how daunting mental illness can be.

He said that for those who live with mental illness, smiling is hard – but when you see someone smiling, just smile too. 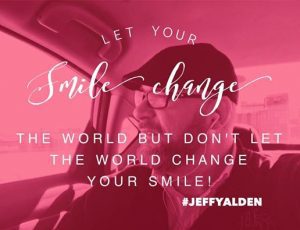 And remember: Self-care is not selfish.

Jeff’s speaking calendar fills up fast. To book him now for your event, organization or school now, call 800-948-9289.