Youth motivational speaker and Amazon bestselling author Jeff Yalden is a big believer in Cognitive Behavioral Therapy [CBT] because he can attest to its positive results in his own life.

Yalden has long been transparent about his own struggles with mental illness and dealing with major depression, bipolar II disorder and PTSD. He has been through major spinal cord fusion and recently became free of diabetes as a result of a lifestyle change following gastric sleeve surgery.

“I’m down 85 pounds and I’m feeling great,” he said, adding that he still goes through the peaks and valleys in life, just like everybody else.

In this episode of The BOOM Podcast, Yalden drills down on the topic of success – and specifically the question of how to measure success.

One of the takeaways from his counseling was that he was really dependent on being a numbers guy – calculating his success based on a spreadsheet: Was he losing a pound a week or two pounds a week or saving ten percent of his income – issues that everybody struggles with at times.

“If I would fail or not come close in one category, then it was like I just let go of everything else,” he said.

His therapist went to work with him on lessening his dependence on playing the numbers game with his progress.

The proving ground for the elimination of numbers-based tracking is at his fitness boot camp at iSi Elite Training in Garden City, South Carolina – not far from his home in Murrells Inlet. He simplified his approach by taking a much less rigid view of his progress there.

“My goal is to work out – to show up, to just be committed to doing my best – and to be consistent. That specifically was by goal back in January,” he said.

Many people in the gym wear a heart rate monitor, including Jeff. After every workout, he receives an email with his ranking for the day.

To be blunt, Yalden works his ass off at iSi – sometimes burning up to 1000 calories per hour class and easily twice as much as anybody else – but he noticed that he is always in last place.

“I gave it that 10 percent – I pushed a little bit harder today. I was sweating like crazy, my heart rate was up and I felt great. I still came in last place.”

But when he got home and saw the results, the realization hit him: Who cares? 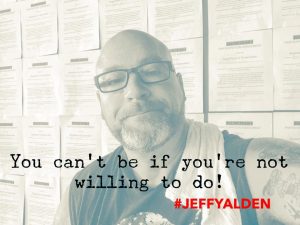 We discover newfound freedom when we realize that we’re not competing against anybody else in our journey and that everybody’s journey is different.

“I am not one of the top fitness competitors in my gym,” he said. “That’s OK. I don’t need to be. My goal is to show up every day, be consistent, do the best I can – and to cheer, support and encourage other people in their workouts.”

Because he pushed a bit harder in today’s workout, Yalden said he got an epic feeling of fulfillment and joy – and plenty of energy to tackle his day. Coming in last on a graph made absolutely no difference.

He cited good friend and fellow author Richie Contartesi and his theory about the three percent.

As Yalden wrote about in his Amazon bestseller, BOOM! One Word to Instantly Inspire Action, Deliver Rewards, and Positively Affect Your Life Every Day, the BOOM is a factor and an effect.

The BOOM factor would be getting up in the morning and going to work out even if you don’t feel like it – and the BOOM effect would be the rewarding feeling of having done it and given it your best.

“BOOM! One word changes everything,” he said.

“Set a plan. Make sure the plan is clear. Take action. Let’s not complicate the big picture. Let’s simplify it – and I think you will be greatly successful.”

To find out more about Jeff Yalden, go HERE.

LISTEN to this episode of The BOOM Podcast.

GRAB your copy of BOOM!