In tandem with the release of his Amazon bestseller, BOOM! One Word to Instantly Inspire Action, Deliver Rewards, and Positively Affect Your Life Every Day, author and speaker Jeff Yalden has launched his BOOM Podcast – the perfect companion to bring the BOOM into your life, reinforcing the principles laid out in his life-changing book and digs even deeper, featuring people who have implemented the BOOM in their lives as well.

A leading youth motivational and mental health speaker for more than two decades, Yalden has addressed more than 4000 teen audiences in all 50 states, every province in Canada and 49 countries including Singapore and Vietnam.

His message has always been hard-hitting, bringing a world of actionable principles to the table and inspiring his audiences to take personal responsibility in all areas of their lives.

And now he has taken these principles and given them life in his book and in his podcast.

In this inaugural episode, Jeff explains with astonishing honesty and self-reflection where the BOOM comes from, what it means to him and why he decided to write the book.

“It’s pretty simple,” he said. “In this first episode, I want to come clean and give you guys a sense of where I have come from to where I am now, and how the BOOM really impacts everything I do.”

As he talked about in the book, coming to his BOOM moment involved a series of major setbacks that could have stopped him in his tracks, or worse.

About four years ago, Jeff went through a divorce which ended a 14-year marriage. Instead of placing the blame on anybody else, he went straight to the mirror and asked himself tough questions, coming to the realization that his mental health issues were much more severe than he thought them to be at the time.

Jeff was pre-diabetic and putting on weight. He said he knew what to do and what to eat, but was basically ignoring the warning signs.

“All of a sudden I was a full-fledged diabetic, but I still didn’t pay attention,” he said.

He vividly recalls the time he went to his parents’ house, physically exhausted and mentally drained and with his diabetes flaring up.

“I told them I felt like I was going to die and I didn’t want to die alone. They gave me some orange juice and something to eat, and I went home a few hours later.”

But his parents intervened that night. Jeff’s dad came to his house, woke him up, and called an ambulance for him. Jeff was a mess. His triglycerides were a jaw-dropping 2784, his blood sugar over 500 and his A1C level was 15.5.

“My endocrinologist said to me that at any moment something catastrophic was going to happen,” he said, adding that even despite these serious warning signs, he still didn’t make the necessary changes, citing his grueling speaking and travel schedule as a deterrent to a healthy lifestyle.

And that’s not all by any means. He endured a spinal cord fusion because of a CrossFit injury and was immobilized for six weeks.

“I couldn’t speak for almost four months and I ended up having a mental breakdown. My diabetes was flaring up and my depression got worse. I wanted to give up, and I did,” he said.

He quit speaking and got a 9-to-5 job, thinking at the time that he just wanted to have what he calls a normal job.

He packed up his office – his life – into cardboard boxes: Computer, fax machine, mementos, awards – even his varsity letters and photos – essentially getting rid of everything near and dear. 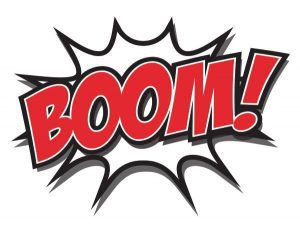 But something awesome began to happen when he started going back to counseling once a week.

“When I walked in there, I was emotionally broken. I was not the Jeff Yalden that many of you know. We started at the beginning and built a toolbox, and I began rewarding myself for small victories.”

As a result of building this toolbox, Jeff eventually made the decision to go home and restore his office and get back to doing what he loves.

This was his first BOOM moment.

Jeff also started taking care of himself – including a gastric sleeve surgery that might well have saved his life.

“That was something I needed to do for me, and when I did do it – it was like – BOOM! That was the reward. I don’t have to let my weight be something that monopolizes my every waking thought anymore. I am down 80 pounds. I am free of diabetes. I brought the BOOM into my life. I celebrate with the BOOM every single day.”

Jeff Yalden has come back stronger than ever, reestablishing his place among the best of the best.

The BOOM will change your life. Grab this Amazon bestseller now by clicking HERE.